It’s no secret that there’s more to delivering a push notification than typing out a ‘buy now, selling out fast!!!!!’ type message and sending it to your entire user base. In fact, that kind of indiscriminate spam is just one of many pitfalls that can damage relationships with your brand when it comes to push notifications. But get them right and they are by far the most effective way to communicate with users while they aren’t inside your app, helping improve some of the key metrics that your business may depend on.

Over the years, we’d like to think we’ve seen it all regarding what to do, and what not to do when it comes to push. We’ve helped world-leading brands build success by implementing simple techniques and tools that make the difference between an unwanted push and something of value to the customer. And what better way to demonstrate than by taking a look at some examples of the kind of push campaigns that in our experience really work. Hopefully they can inspire you!

The unavoidable truth is that 7 out of 10 carts are abandoned on mobile. That’s a big number, and as a result reducing that figure is a simple way to immediately grow your business. That is exactly what a fashion app that we work with did by implementing abandoned cart recovery messaging. A push notification campaign enriched with unique personal and contextual data for each user increased conversions by 15.8%, generating over $6 million dollars that would have otherwise been lost. I think we can all agree that $6 million dollars counts as a successful campaign.

Mobile apps have created new opportunities for companies looking to measure customer satisfaction. For instance, one of the world’s largest airlines sends push notifications to passengers when flights land and passengers are still on the runway - the perfect moment. These messages are triggered when airport geofences are broken, and ask passengers to take a quick and easy survey. When clicked on, the push deep-links to the simple in-app survey. Some 300,000 customers have already taken part in this ‘Rate My Flight’ campaign, with 92% rating that they were satisfied with their experience. A huge PR win (and more accurate and helpful feedback for the company).

Campaign 3 - Increasing Revenue Per User In A Casino App

Sometimes it’s the simple things that deliver the strongest results. A leading casino/slots business used a time-sensitive push campaign to notify users of a 20% bonus on tournaments for that day. But in a twist, these were targeted specifically to users that had been identified as having spent less time in the app recently. The results were impressive, with revenue per user increasing by 35%. Of course, it’s not always wise to offer discounts, as you don’t want to devalue your service or cannibalise product revenues. However, as shown in the example above, they can also be very profitable when sent to the right users.

Campaign 4 - A Games Company Sends Campaigns At The Perfect Time

At heart, push notifications have one core goal: bringing users back to the app. One of the world’s largest games companies used optimally-timed push campaigns to improve response rates to campaigns and thus drive greater engagement rates (a key metric in mobile gaming). Optimal timing simply identifies the most common time that each individual user has historically visited the app, and then sends push notifications at the specific time within a given window that each individual is most likely to respond. Again, this simple technique was incredibly effective, with an over 200% increase in engagement over the non-optimally timed variant.

Like any relationship, the early stages on mobile are the most crucial. People have large numbers of apps on their phones - and getting onto that screen is only half the battle. Staying there is the other. A customer specializing in online learning sent reminders and encouragement notifications to their students to nurture the relationship and make sure that they use the app regularly and get ‘in the habit’. Day 1 messages saw an increase in retention of 28%, Day 5 19% and Day 7 16%. This made a huge difference to revenue down the line. 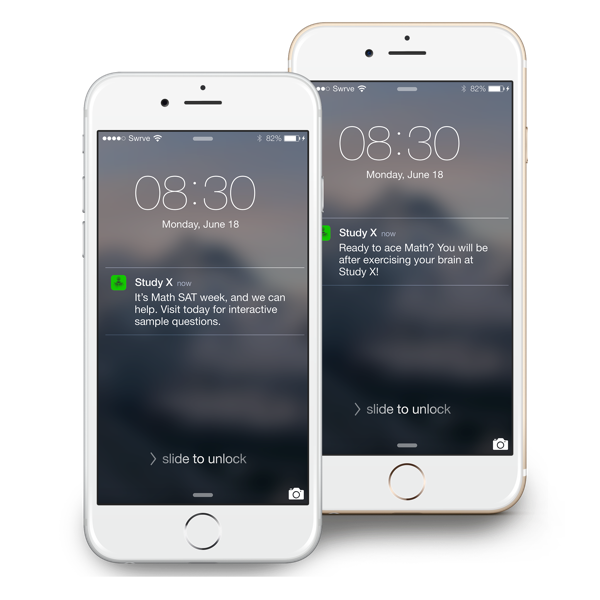