The mobile games industry has been growing at a fascinating rate, with worldwide gamers reaching 3.2 billion in 2021, up from 1.9 billion in 2015. There are currently ~180 million monthly gamers in the US alone—that’s more than half of the US population identifying as digital gamers. 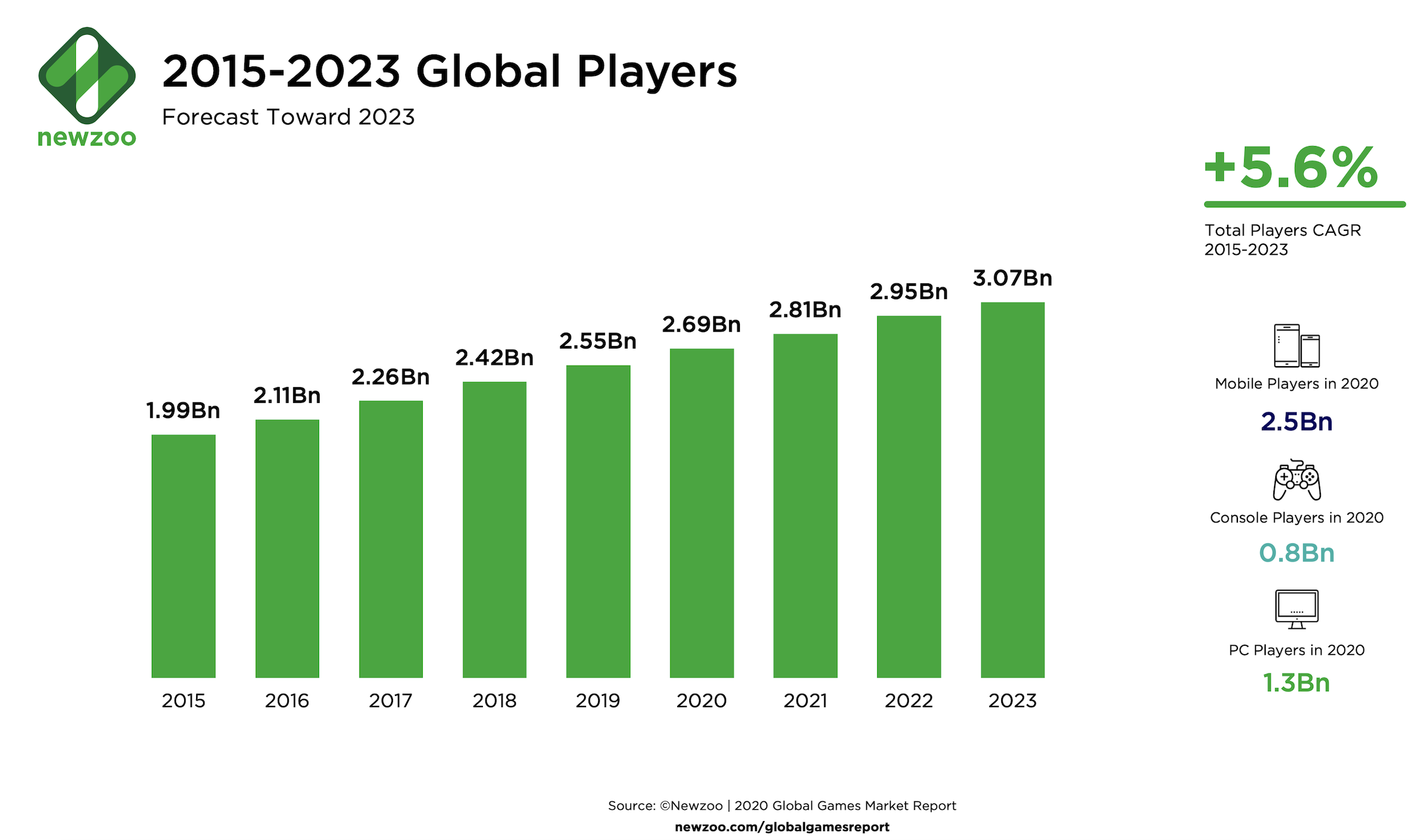 Mobile game consumer spend reached $116 billion in 2021, dominating the app store revenue share and up by $16 billion from 2020. Mobile captures more than 50% of gaming industry revenue and is growing much faster at 7% annually, versus 1.4% for the gaming industry as a whole.

With downloads and spending on the rise, it might sound like your job as a marketer is complete. But competition is also ramping up, forcing marketers to prove their adaptability and find new ways of gaining and keeping user attention.

User churn is high, so you need to take a holistic approach focusing on user acquisition, in-app experience, engagement, and retention. By not hyper-focusing on acquisition, you can ensure the users you have spent time and money on acquiring remain engaged and result in a higher LTV.

Here are the mobile gaming trends shaping the market today and why they’re crucial for your mobile engagement strategy.

As generations have grown up with video games as a normal part of life, the age of the average gamer continues to rise. The classical view of gaming as a hobby among hard-core, young male enthusiasts has shifted to a more diversified audience. The growth of mobile gaming, quality content, and increased accessibility over the last ten years means the love of gaming is now shared by young and old alike. 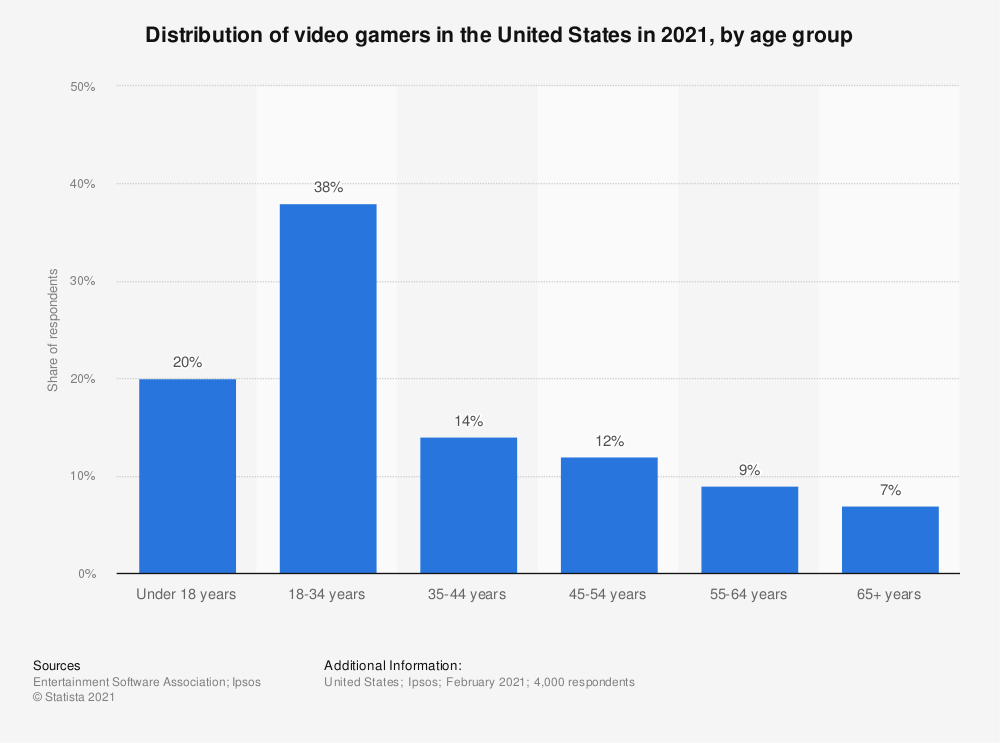 Moreover, female gamers are becoming a force to be reckoned with as they accounted for 45% of the US gaming population in 2021, up from 41% in 2020 and 38% in 2007. The male/female split of gamers is quickly approaching 50/50. According to research by Google, 65% of women in the US play mobile games. 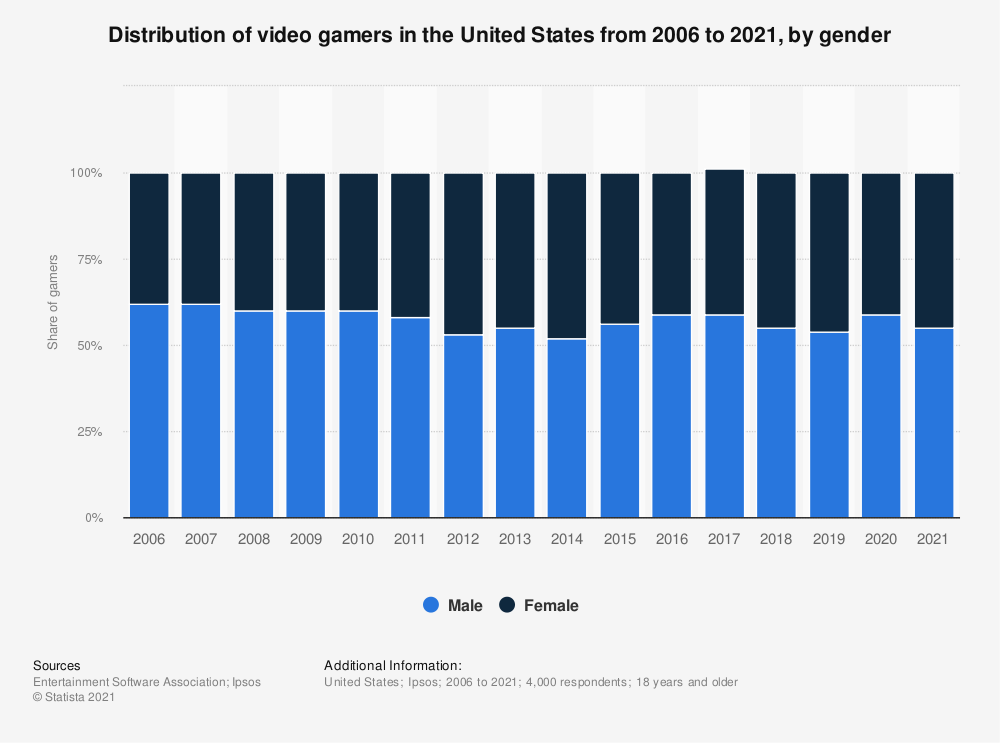 Video gaming is no longer exclusively enjoyed by the young male population. Why is this important as a mobile gaming marketer? Understanding your audience segments can help you build marketing campaigns that target the right users with the right messaging.

Privacy changes like Apple’s ATT have shaken the mobile ecosystem and the games market within it. Although the update rolled out a year ago, mobile gaming apps are still struggling to overcome IDFA challenges.

Now, however, developers must request permission to track users’ data in apps using a standardized prompt. If a user declines, the developer can no longer track their data in that app. The change in Apple’s use of IDFA makes targeted advertising more challenging and directly impacts user acquisition and monetization. 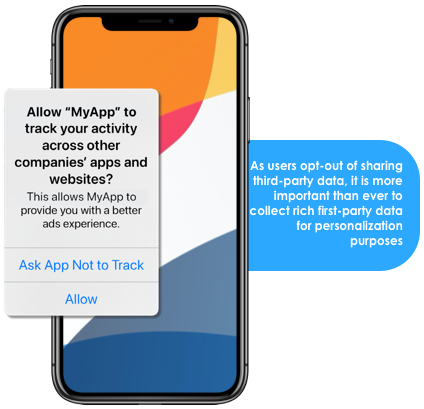 Mobile game marketers need to adjust to these new regulations and concentrate their efforts on maximizing the user opt-in rate to continue delivering relevant content to their customers. Fortunately, there are several strategies you can implement to encourage users to provide their consent.

Nonetheless, the ramifications of privacy will continue to reverberate, and there is tremendous uncertainty around the consequences of less player attribution. Mobile privacy changes will continue to affect mobile apps, with even Google and Apple themselves having to adapt to the fast-changing landscape. So, acknowledging that these updates are part of a privacy-centric future—and adapting to them—will be crucial for success.

The Netflixization of Mobile Gaming

Subscription is a popular monetization method for non-gaming apps and, as predicted by publishers, is now finding its way into the gaming industry.

Apple Arcade and Microsoft are leading subscription-based gaming. For $15 per month, players can access all the games Microsoft owns and those of any third-party developer who wishes to participate in any platform that supports them.

This includes not only the Xbox console and Windows PCs, but also the new Xbox streaming service, which makes console-level games available on mobile and PC and, soon enough, smart TVs or a potential Xbox streaming stick.

About Half of All Gamers, 3 in 4 Millennial Gamers Say They Use Subscription Gaming Services 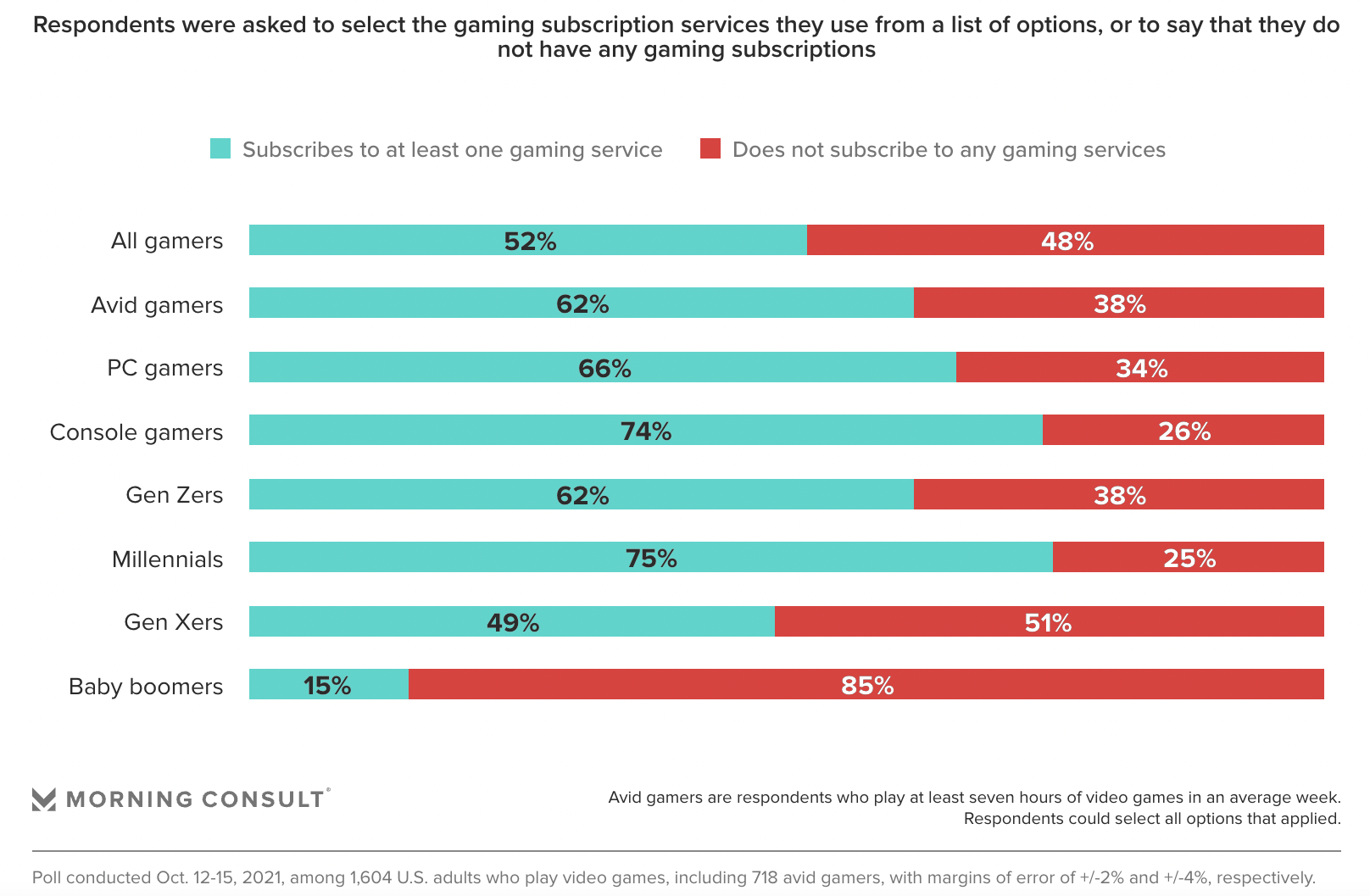 Players can have a sustained investment in a library of well over a hundred titles, all for a monthly subscription fee far below the cost of a $60 blockbuster title. The promise is one of convenience and value, which is simply too great to pass up compared to one-off purchases.

For game makers, they have a built-in audience hungry for new content and a launch where the risk of having to sell the game is removed. This changes core gameplay where developers are not always trying to upsell the player at every opportune moment.

Hyper-casual games were the top-performing mobile gaming genre in 2021. According to App Annie, the most successful genres within the category are runner action and 4X march-battle strategy. In Q3 alone, of the 14.3 billion mobile games downloaded, 3.6 billion were hyper-casual, and some of the most successful examples of monetization, engagement, and retention.

App Annie wrote on PocketGamer.biz: “The design and development process for hyper-casual titles varies greatly from the more ‘traditional’ approaches found in the PC and console markets, with very short design and development cycles, combined with an incredibly tight focus on testing, metrics, and iteration required to produce a game with low cost-per-install and high Lifetime Value.”

Mobile Is the Key Driver for Growth

Mobile is now the primary driver of growth for digital games consumption, increasingly becoming the world's preferred form of gaming and central to a robust cross-platform experience. Still, mobile phones are the most popular gaming device by a considerable margin.

Improved connectivity, hardware, and screen size have made it easier than ever to enjoy premium gaming experiences on the go. As a result, consumers have migrated their share of wallet to mobile as the de facto gaming console. Globally, users downloaded over one billion mobile games per week in Q1 2021, up 30% from Q4 2019. 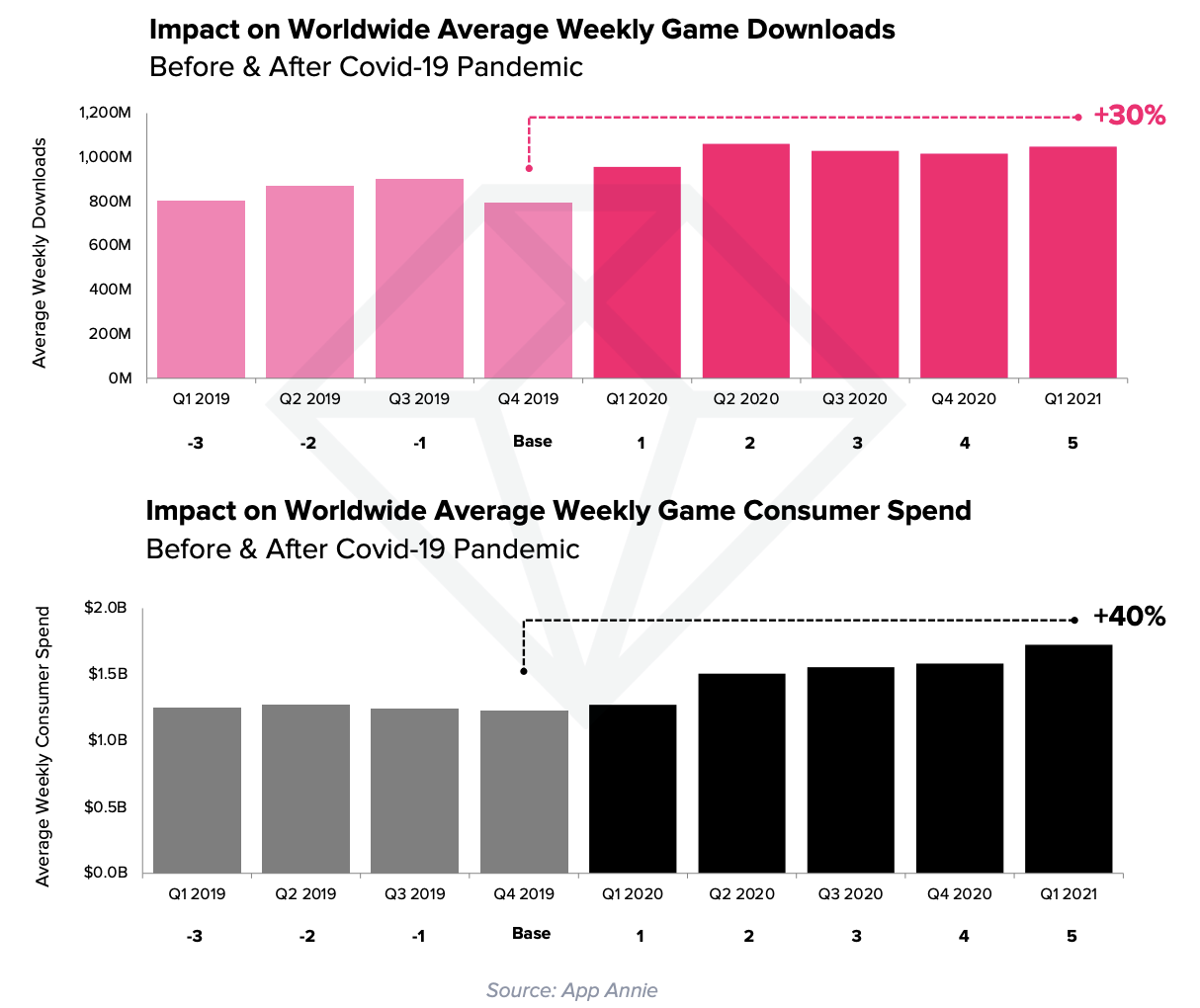 During the same time, consumers spent $1.7 billion per week in mobile games, up 40% from pre-pandemic levels. According to December 2021 data from Sensor Tower, annual mobile game app store revenues increased over 16% YoY to $37.3 billion on Android and nearly 10% YoY to $52.3 on iOS. 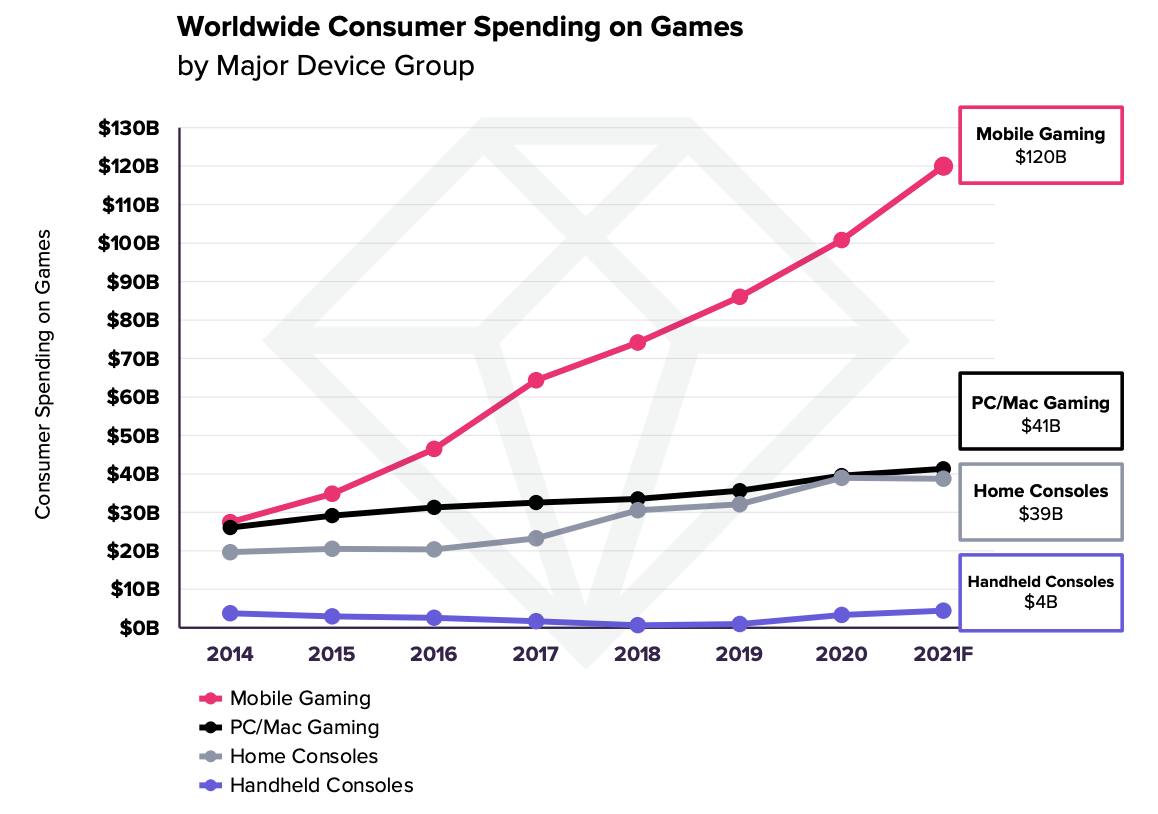 And the demand for mobile gaming shows no sign of slowing down. There will be more than 150 million monthly mobile gamers in the US this year—over 89% of all digital gamers.

The console and mobile experience are also merging; mobile devices are now capable of offering console-like graphics and gameplay experiences along with cross-platform competitive features.

Game publishers are increasingly prioritizing mobile as part of their platform of choice to expand their user base. The top-grossing games Lineage M, Lords Mobile, Roblox, and PUBG Mobile leverage cross-platform experiences that translate into long-term engagement and monetization.

Gamers Will Be Spoiled For Choice

This year is on track to be gaming’s biggest yet in terms of spending and content. Covid related delays have inadvertently led to one of the most crowded and exciting gaming release calendars in recent memory. At the same time, live operations will continue to innovate across the free-to-play and mobile spaces, keeping players engaged and spending money on their favorite games.

With mobile game churn levels higher than other app categories, along with a more crowded than usual marketplace, your user engagement strategy will need to be on top of its game.

Push notifications are a quick-win channel you can implement immediately to continually engage gamers.

Push notifications give you direct access to your audience whether or not they are inside your app. They are incredibly effective in achieving consistent engagement and long-term retention, particularly in a crowded space like gaming.

With push, you can instantly reach customers in real-time based on a multitude of user behavior scenarios.

When a user has been inactive for X number of days, you can send them an invitation via push to come back into your app to complete a new quest or challenge. 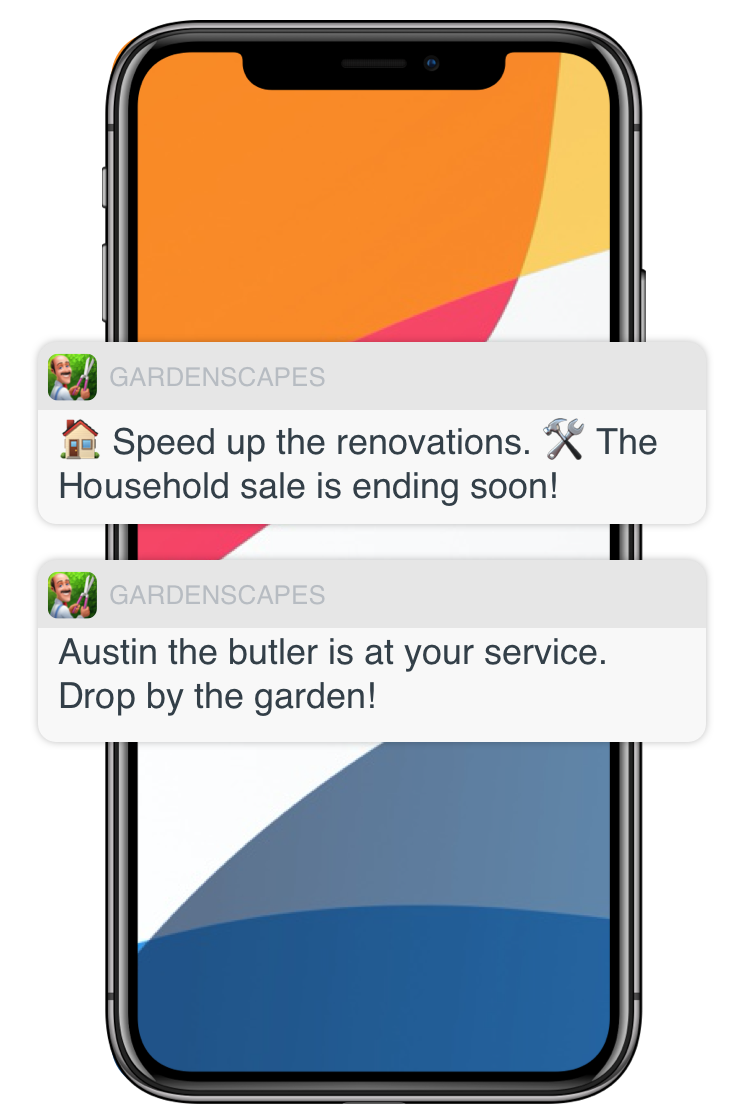 If a user leaves your app after several unsuccessful attempts at completing a level, you can reengage them with a hint or an extra life. 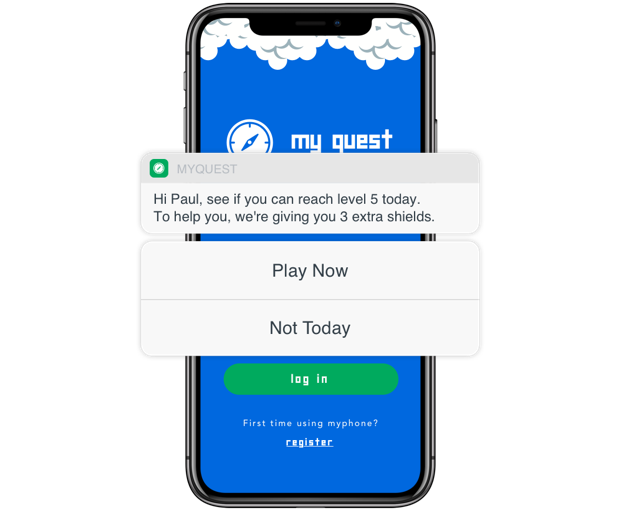 Send a challenge from one of their friends in the gaming community or spark their competitive spirit by showing how their high score measures up to others. 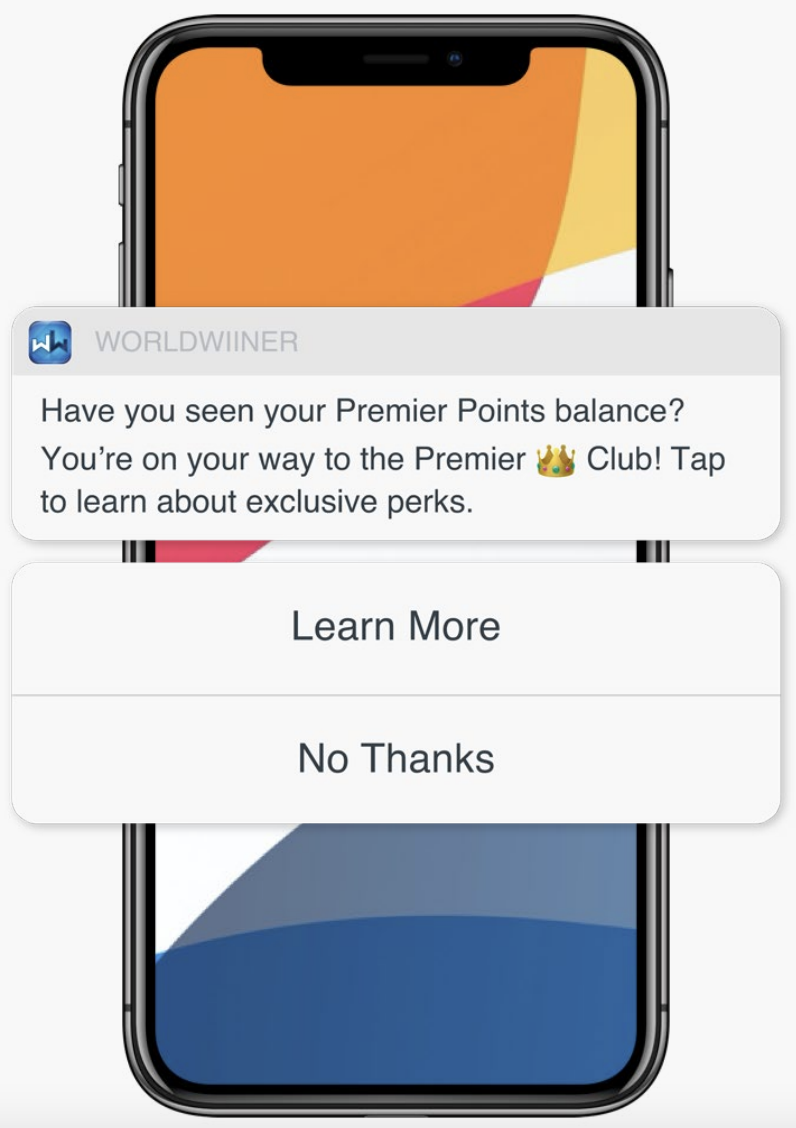 If a user is churned but still has your app downloaded on their device, you can reach them with push notifications—as long as they are opted in to receive notifications. Remind inactive users why they downloaded the game in the first place or introduce them to a new feature they haven’t seen or used yet. You can also use the opportunity to ask them for feedback to learn why they decided to stop using the app.

Advances in technology continue to change the way games are made and played. The mobile gaming market, in particular, is one that’s always in motion, with no sign of slowing down.

As mobile gaming usage and viewership spiked over the pandemic, mobile is set to grow its global lead on gaming consoles by 3.1x in 2022. Consumers spent more time at home, and gaming provided a means to stay entertained and connected with friends. The ability to connect with others during the pandemic elevated the social aspects of gaming across all devices, especially mobile. And this trend is continuing beyond lockdown.

At Swrve, we help the top gaming studios in the world engage with their customers. We understand the importance of player engagement, retention, and, ultimately, revenue growth. With that in mind, we have built a solution that allows you to deliver holistic, personalized player experiences in and outside the game—all without the dependency on technical teams.