Are Push Notifications A Smart Way To Bring Back Users?

A customer of ours recently came to us saying they were disappointed with click rates relating to their push notification campaigns. And although we love to remind people at any given opportunity that click rates are borderline irrelevant (focus on engagement folks!), nevertheless we felt it was worthwhile taking a closer look at the problem.

This particular campaign saw a whopping 1.2 million push notifications delivered in one go with the purpose of letting users know about a great offer available to all. What could possibly go wrong? Well, the organization in question was disappointed to find out that there were only 16,500 clicks from the 1.2 million push notifications - a 1.38% click rate. This isn’t really all that surprising a figure, and comes close to the average click rate for iOS push notifications (1.2% - although note the typical rate for Android is a decent amount higher), but they nonetheless expected better. And who can blame them? A response rate of 1.4% might feel like some sort of an achievement, but flipping things around it could fairly be argued that the business is teaching 98.6% of customers to ignore them.

To get a read on the nature of the ‘problem’, we carried out a segmented analysis on click rates. This involved putting users into segments based on how recently they have been active in the app, and establishing what the click rate was for that group in isolation. That analysis provides a massively helpful insight about the nature of push notifications - who and what they are effective for - that we’ll now discuss in detail. But first, take a look at the chart below of the referred to segmented analysis: 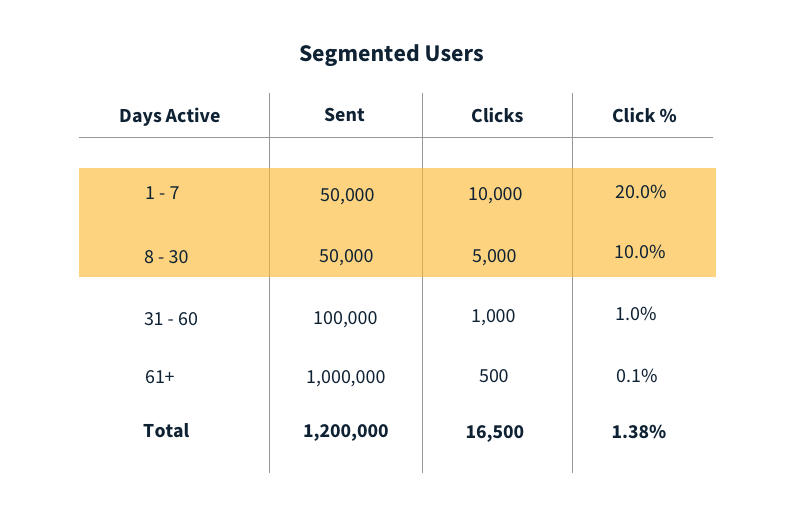 No surprise perhaps, but the campaign was exponentially more effective with users who had been active in the app over the previous month - a group containing 100,000 people. We’ll class these as active users. Users active within a week saw the highest click rate - 20%, or 60.6% of all clicks - with a gradual decrease in interaction over the next 3 weeks to 10%. This shows an impressive 15% click rate overall amongst active users of the app. Crack open the champagne!

2. Inactive Users Are Not Responsive

Hang on there just a second pal. Put that mug of bubbly down. The results for 100,000 active users are great, but they’re not so hot for the rest of the 1.1 million ‘inactive’ users. There were just 1,500 clicks, with an overall click rate of 0.14%, from 1.1 million push notifications. It doesn’t take a data scientist to figure out that this is simply not working.

The Needs Of Different Users Should Be Considered

In the above example, the less active a user has been, the less likely they are to interact with a push notification. That much is glaringly obvious. The results suggest that different segments of users should be targeted with different approaches. Push should never be thought of as a silver bullet for your retention or re-engagement strategy, and should be combined carefully with other techniques as part of a more holistic marketing effort. Let’s take a look at an alternative approach for campaigns for each type of audience: