In-App Messages: What Are They, How Do They Work, And How To Use Them Effectively

The mobile app continues to establish itself as the number one screen when it comes to brands talking to consumers and vice versa. Given that situation, it becomes ever clearer that marketers must make every effort to make that app experience as compelling as possible - for each and every one of our customers and users.

But in the conventional app ecosystem that isn’t always easy. Native mobile apps are hard-coded, submitted to the app store, and ultimately the same for each and every user. An onboarding process, for example, is the same for everyone. And changing it involves months between having and idea and getting it into the live environment. As a result, apps are restricted in key areas to the ‘one-size-fits-all’ approach - which greatly restricts their ability to drive the metrics that add up to mobile success.

Enter in-app messaging - the solution to all of these problems! In this post we’re going to take a longer look at the subject. Let’s start by defining our terms.

What Are In-App Messages?

Before getting into the detail it might be worth starting from the end result. In a real sense In-App Messaging is best defined as

“The process by which custom screens, tailored to the individual and served dynamically in response to specific in-app triggers, are included in the app experience”

There’s a lot of words in there, so in order to demonstrate how they work let’s break things down a little….

How To Use In-App Messages Effectively

So far, so good. But like any technology, you can either use this stuff to deliver great experiences to your users (and enjoy their undying loyalty as a result) or you can annoy the hell out of those same people (and never see them again).

Let’s deal with the latter option first. It probably looks something like this:

At this stage you probably get the idea. Marketers have an unerring ability to ruin anything. But it doesn’t have to be that way! Here’s three simple campaigns that I hope collectively demonstrate the right way to use in-app messages: a way that customers love and will prove profitable for any mobile business.

Onboarding is absolutely vital in the world of mobile apps. And it’s always preferable to use in-app messages rather than static hard-coded screens, for all the reasons we’ve already discussed. Dynamic screens can be changed and tested quickly. But perhaps even more importantly, alternative onboarding experiences can be delivered ‘in the moment’ dependent on the acquisition source of each individual user.

This matters - a lot. Brands spend millions on digital advertising encouraging app downloads, at which point the trail usually goes cold. The user has clicked on an ad with specific creative, and possibly referring to specific features or benefits of an app - and then gets the generic welcome experience.

By deploying multiple alternative onboarding screens using in-app messages - alongside the ability to process in realtime the source for each new user that arrives - an experience tailored exactly to the ad or offer the user responded to can be displayed. The result is significant uplift (typically around 20%) on the number of users who get to purchase - a metric that changes the acquisition spend equation dramatically. 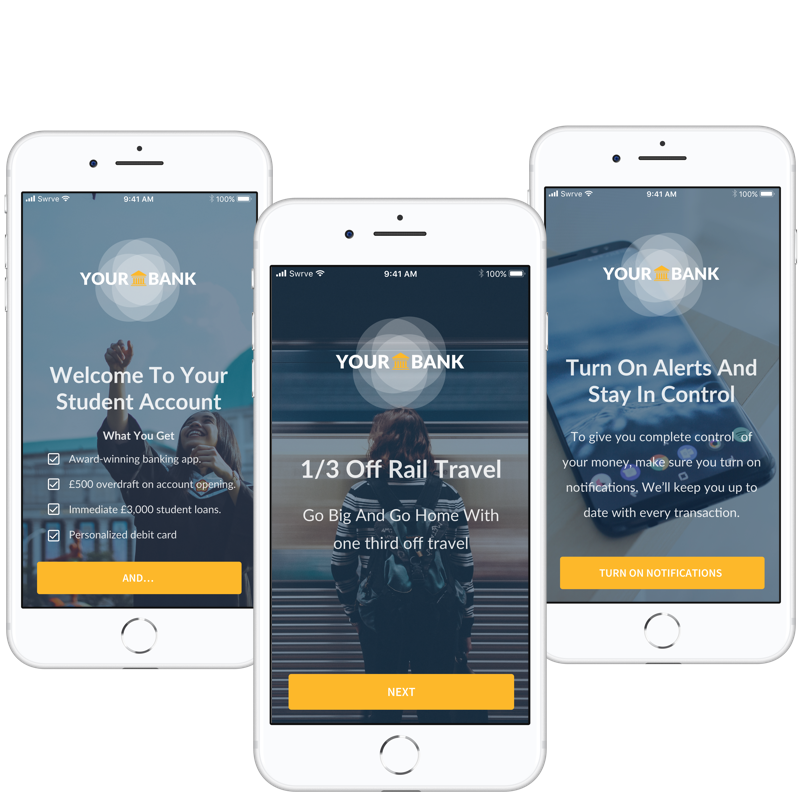 It’s a challenge many media, entertainment and streaming organizations face - particularly in the modern digital media era. Those that rely on users taking out subscriptions can struggle to get them to do just that. In-app messages and campaigns can help.

Start by offering a free trial (most do this already). But instead of simply delivering a typical ‘one-size-fits-all’ campaign, the type that simply sends a ‘subscribe now’ message on the 27th day of a 28t day trial, instead take the opportunity to collect data during that trial period and thus build up an understanding of each user as an individual. Doing so can increase trial conversion rates by 30% or more.

Great conversations, in any medium, start with listening. And the mobile app gives us unprecedented access to data at the user level. Use it! In this context, hooking up our in-app campaigns to user data means genuine targeting that makes messages helpful rather than irritating. It also means more effective campaigns that drive action by being customized to the specific user behaviors that have already been observed during the trial. In the example below, for example, this simple message reflects the fact that this specific user has browsed and read more political content than any other. 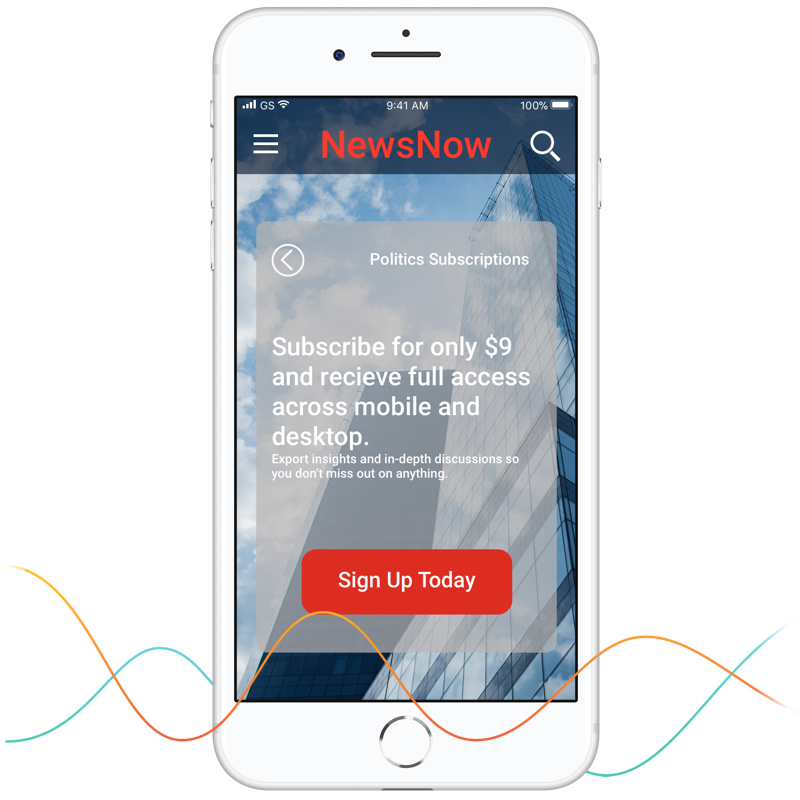 It’s vital for any business to have a clear handle on customer satisfaction. You don’t need to be the world’s greatest NPS disciple to be aware that happy customers lead to success - and vice versa. Unfortunately, as our users and customers flock to the mobile app, the old techniques we used to perform this task don’t function so well.

Step forward the interactive in-app message. There are many ways in which a message like this can be triggered. It could be based on the user breaking a geo-fence as they leave a bricks-and-mortar branch. It could be delivered following the user completing a specific process (such as purchasing) for the first time. Or it could simply be randomized in order to get a snapshot of app user opinion.

These campaigns can also be used, as shown, to both collect feedback on the app itself and - if the feedback is positive, then send users on to the app store to rate in public. This simple process can have a dramatic impact on average ratings. We’ve worked with customers who have seen ratings of 2.7 increase to 4.2 within a fortnight.

And perhaps even better, this interactive campaign can collect further data from users who are not enjoying the experience, and improve product as a result. 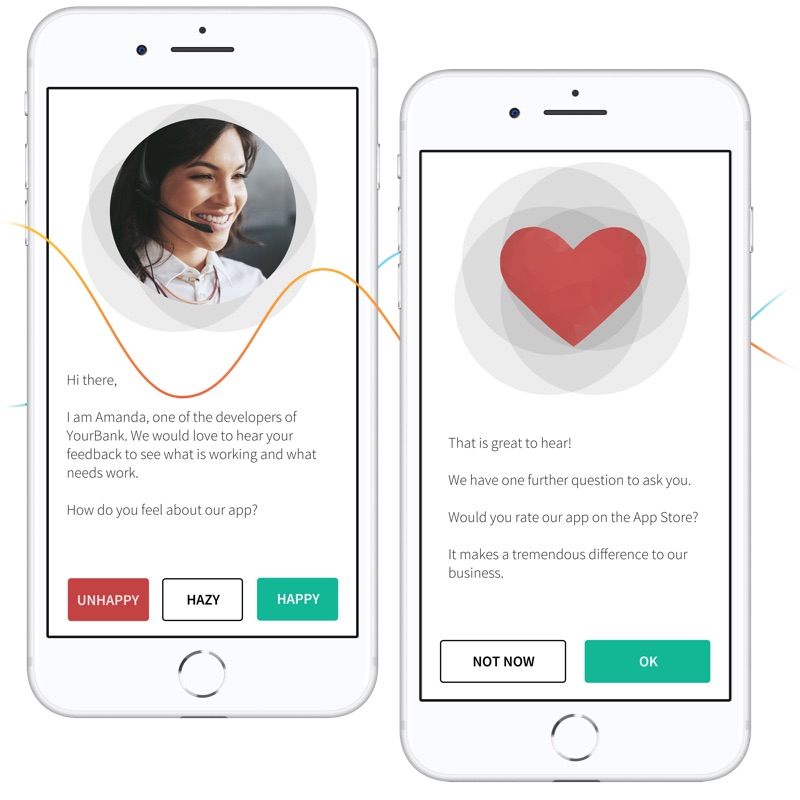 These, of course, are just three examples. But the truth is in-app messages enable smart app businesses to optimize and test a huge variety of common processes within the app, in addition to supporting targeted delivery of an almost infinite variety of sales or marketing messages. They are the single smartest way to deliver great (and relevant) experiences - and as a result drive success on mobile!

Permanent TSB has a long banking history in Irish communities, with roots that stretch back over 200 years. Throughout this ...