Tips to Increase and Improve Your App Store Ratings

There’s an app for that. What started as a phrase coined by Apple in 2009 to show the multitude of apps available for iOS devices through the App Store has now become quite literal in describing the current app marketplace.

Users today have numerous options to choose from for every problem they look to solve with an app. And when deciding which apps to download, they rely heavily on app store ratings and reviews to guide them in the right direction.

Why Are App Ratings So Important?

Ratings and reviews play a vital role in the growth and success of your app. Ninety-nine percent of the top 100 grossing apps have a rating of 4 or more stars. So an app with an average rating of 3.9 that can boost ratings by just 0.1 would instantly start seeing an increase in downloads and an improvement in app store rankings.

On the other hand, negative reviews can adversely affect your average rating and reduce your app’s visibility in the app store. So it’s crucial to avoid accumulating too many frustrated customer complaints that could damage your brand reputation.

How to Improve Your App Rating

To yield high-quality reviews, how and who you ask to recommend your app matters. Here are some actionable tips to proactively generate positive app store ratings and reviews.

Probably the most obvious way of achieving better ratings is to provide a high-quality app that satisfies users’ needs. But it doesn’t matter how awesome your app is; there is always room to improve the user experience.

Your app must function well, so update it often, solve bugs and constantly work on improving the user experience.

Use a Pre-Prompt Message

Pre-prompt messages are a powerful yet underexploited strategy for boosting your review score. More commonly known when requesting app permissions, this approach is equally effective for app store ratings.

The pre-prompt works by first gauging users’ satisfaction before officially asking for a review on the app store. For example, present users with a preliminary satisfaction question asking if they are enjoying the app without mentioning a rating. If users indicate they are happy and enjoying the app, continue the flow to the next screen, asking users to leave an official app store rating. 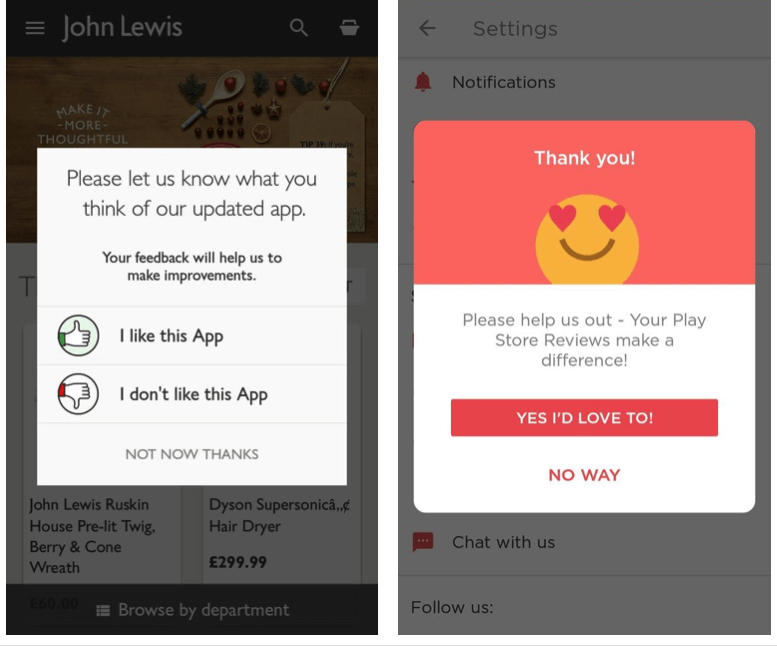 If a user responds negatively, delay asking them for a review. Instead, give them the option to provide feedback so you can understand what features they are not enjoying or the problems they are having—particularly if these are users you segmented and identified as engaged and satisfied. 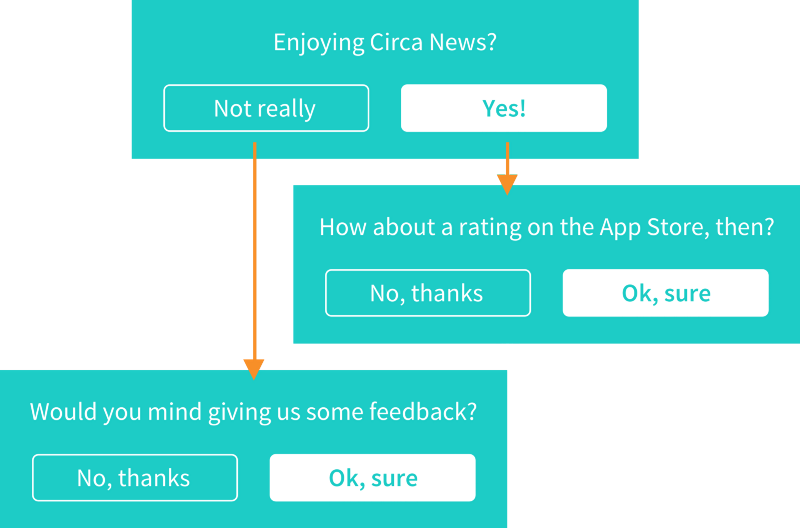 The house hunting app Realtor.com uses a pre-prompt in-app message to gauge customer interest in the app. If the user responds positively to the first prompt, they receive the call to rate the app. Even better, the campaign only delivers to house hunters after they complete a high-value activity such as favoriting a property listing, ensuring they’re having meaningful interactions in the app, and not interrupted in the middle of a task. 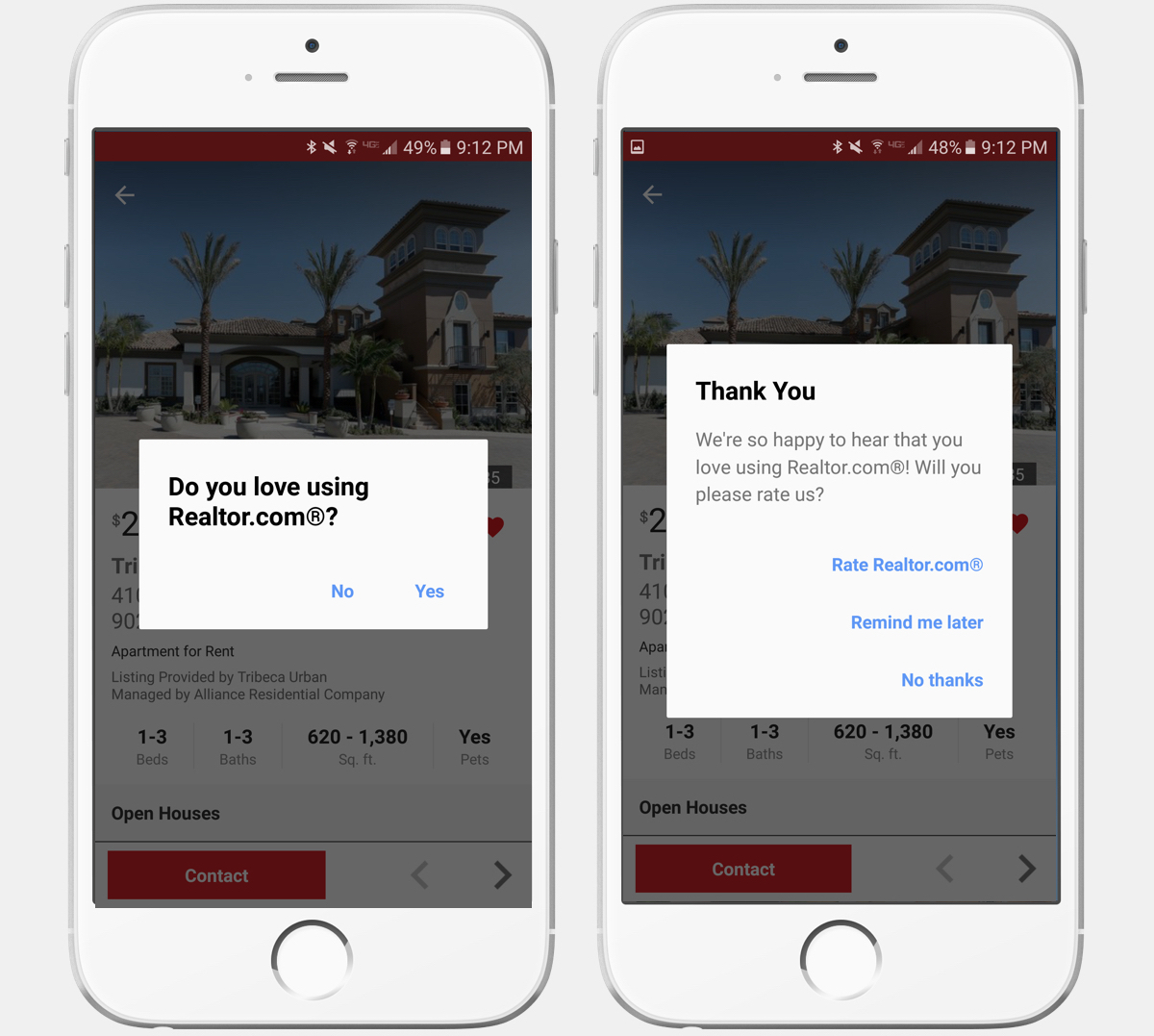 The result? An average rating of 4.7 from almost 900k reviews across the Google and Apple app stores.

Generic, one-size-fits-all messaging is rarely the right approach for any campaign, and the same is true for soliciting user reviews. Asking every user to review your app isn’t a good idea, particularly if there are dissatisfied users just waiting for the opportunity to publicly leave their negative feedback. You have the data to prioritize asking engaged, loyal users at your fingertips, so you should use it to your advantage. 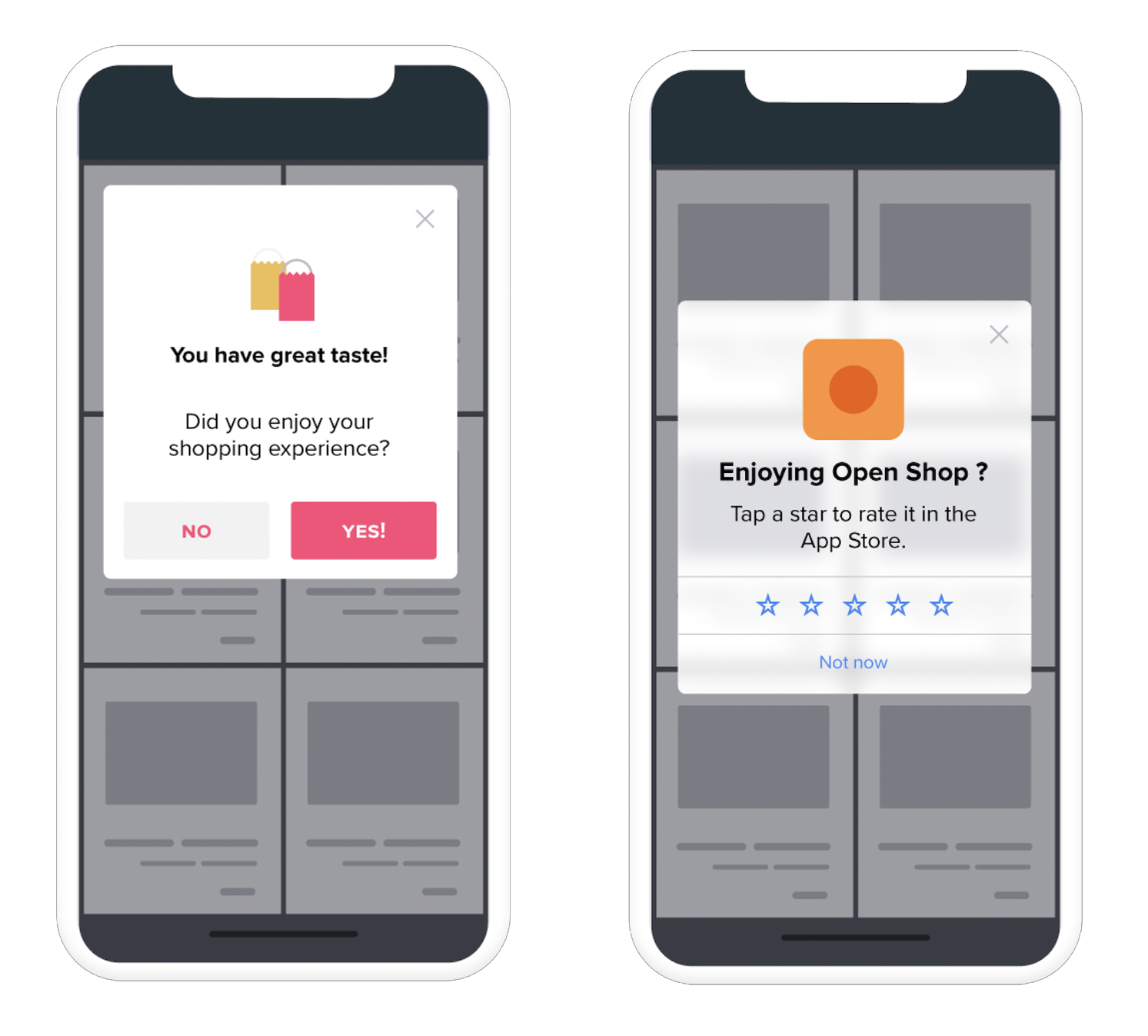 Segment your audience so those receiving prompts are likely to respond and, more importantly, respond positively. Active, engaged users are typically more inclined to rate their experience positively.

First, define what this user looks like for your app. You might base this on the number of app sessions, time in the app, frequency of use, number of purchases, game levels completed, or another high-value action. 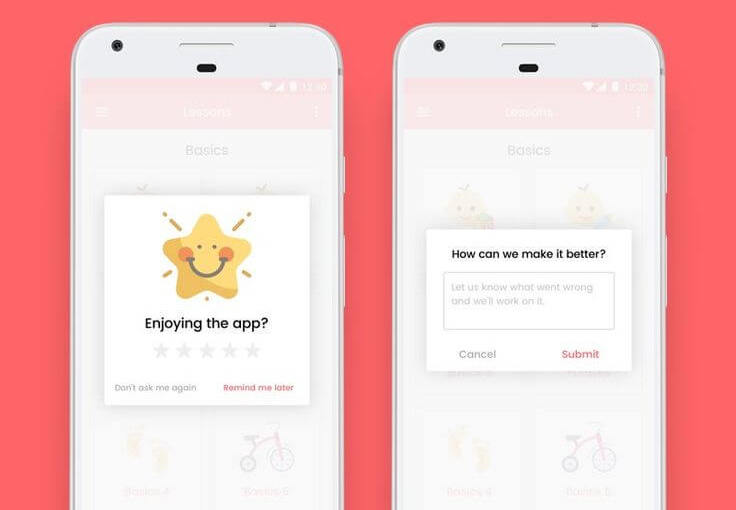 Then, send your campaign to users meeting that criteria. For example, send an in-app message to users who have placed at least five orders in your app or spend at least ten minutes in each app session.

By defining what engagement looks like in your app, you can make accurate predictions about which users are happy and feeling positive about your app and, therefore, likely to leave a positive review.

Optimize the Timing of Your Request

Once you’ve identified your satisfied users, engage them in moments that make sense and where they won’t feel interrupted. You want to catch your users when they are feeling excited, grateful, or positively toward your app. So think about the exact moments when this would be.

Trigger your campaign to reach users at precisely the right time based on their in-app behavior or key milestones. Remind users to review your app with a push notification an hour after they’ve received their delivery from your food app, for instance. Or ask how they are enjoying their experience after exploring a new feature. 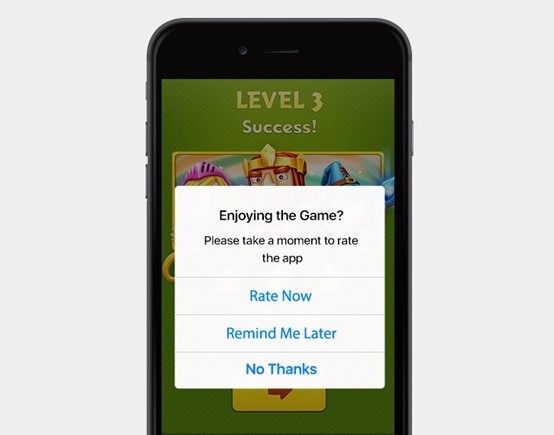 Sending a rating prompt after the user has had a positive interaction, like advancing to a new level in a game or course level in a learning app, makes sense since you know the user has just experienced an exciting moment within your app.

The best way to generate positive ratings is to field a quality app that sparks an enthusiastic response from its audience. After that, asking satisfied users at a time that makes sense helps new users discover your app and convert into future reviewers in their own right.

Download our whitepaper to learn more about increasing your app store rating, or read our client case study for inspiration to launch your own ratings campaign.