If you look at the 20 top grossing iPhone apps you will notice that all of them are free to download, and all of them (that are not games) use auto-renewable subscriptions. This is a model that has worked very well over the past few years, but some aspects of it needed fixing, and iOS 10 has thankfully come along to address these issues. Let’s have a look at what has changed:

1. Auto-renewable subscriptions are now open to all categories of apps

It’s no coincidence that the top 20 media apps all use auto-renewable subscriptions as their core business model - it is key to profitability! The big change here is that this potential minting press is no longer limited to media: all apps can now take advantage of this. For example a fitness app that could only offer a once off ‘upgrade to pro’ payment can now offer a month-on-month subscription for the full service.

2. The publisher gets more proceeds after the first year

Like before, Apple will take 30% and the publisher will get 70% in the first year. Unlike before, Apple will only take 15% in subsequent years, giving the publisher 85% thereafter. This is obviously great news, and will certainly help apps make more money. However, it was not previously the main blocker to profitability, which is, and will remain to be, conversion, i.e. turning a free user into paying customer. Most apps only really convert about 2%-3% of users, but this is a figure that apps live and die by - improving this has to be a priority.

The great thing about the App Store is how little friction there is when making a purchase; it is only one simple and familiar touch away, which always beats 6 pages of account and credit card entries. This vastly improves conversion rates, and far outperforms other methods. Sure, if you do this internally you’ll get all the money, but you also get carpet burn levels of friction. Typically, when using Apple, conversions are between 100%-400% better. Some say the downside of this is that you don’t get to know who the user is, and you don’t have a direct relationship with them… well, there is a simple fix to that, and we strongly argue that you publish through the App Store.

3. Subscriptions groups are no longer limited

Previously, subscription offers were pretty limited. Now there is a lot more flexibility in the pricing model, allowing for multiple options. A great way of monetizing is starting users off on a low cost plan and iteratively upgrading them once they pass certain thresholds or usage conditions. In iOS 10, an upgrade takes place immediately, while a downgrade waits for the current subscription to end, which is all positive for the publisher. And of course all these price plans can be A/B tested to find out which ones make the most revenue for the app.

Apple would only let you price once - in dollars - which was then converted automatically into different currencies. In iOS 10 you can set prices for individual territories. This is great for basing prices on local market conditions, and you can command a better price in a region that is particularly strong for your app. Or you can experiment in a region with isolated A/B tests - New Zealand is a particularly popular country to do this in - which you can apply worldwide once the results are in and you are confident which variant works best.

5. You Can Preserve Pricing for Existing Customers

Previously, if you wanted to change the price of a subscription, you had to it for all users - including existing. This broke the subscription contract, and current subscribers had to re-subscribe manually - they had to go into iTunes, find the app, find the plan and resubscribe. What this did was effectively create the most effective churn machine there ever was. This has now changed, and any price increases can be applied to only new customers, which will not affect current ones, taking out that unnecessary churn risk 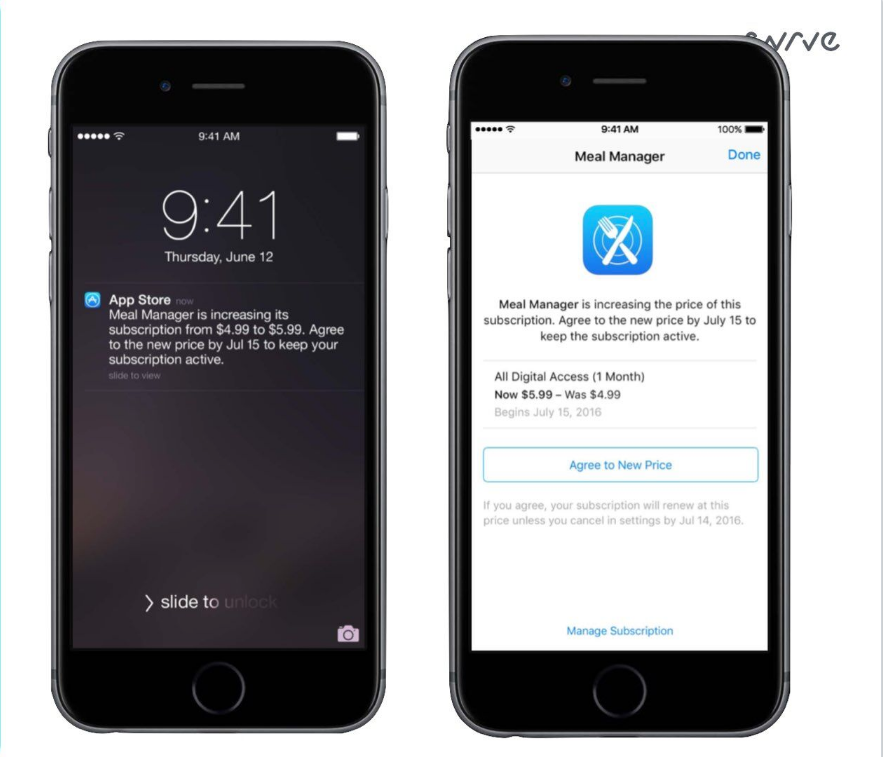 This is partly covered in the point above, but Apple have gone one step further and have improved how they communicate price changes. Their opt-in messaging, consisting of a push notification which takes the user to a 1-touch opt-in screen into the App Store, creating a much more frictionless experience for the user.

Cumulatively, these add up to a big change that affects billions of dollars in the economy. For growth and revenue teams the opportunity to grow a sustainable business and increase revenue is huge. In the next blog post, I will concentrate on ways that apps can profit from these changes.