What In App Messages Mean For Different Verticals

Over the years we’ve seen some pretty staggering improvements to app metrics as a result of building a clear ‘message strategy’. For one telco app we worked with, we were lucky enough to be able to compare customers who received messages via Swrve to a control group of those who didn’t, and thus get a clear view of the impact that an effective messaging program has on engagement.

The improvement was clear, including a 7.8% increase to time spent in app, and a 12.8% increase to 30 day retention. Those are the kinds of metrics that can really matter to your bottom line. After all, the more time users spend in the app, the more revenue they’re likely to generate. For any app, no matter what the industry, building a dialogue with your users through messaging can mean a significant increase to ROI.

All too often, when people think about communications in an app context, that means just one thing: push notifications. But whilst push is undoubtedly important, so are in-app messages: the campaigns and communications that users see during the app experience itself. The two main advantages of in-app messages might seem pretty obvious, but they’re worth looking at in more detail: firstly, they allow you to speak to users whilst they’re in the app, and secondly, they are dynamic messages, rather than part of the structure of the app.

Notifications within the app give you more control than push over how much text to include and what the message looks like, rather than having to fit a standard android or ios notification. And speaking to users whilst they’re in the app also means you have an audience who you know are interested, and that your interactions can be timed for maximum effect by being triggered by users’ actions in the app. It is speaking to customers when they are most receptive.

Meanwhile, using messages rather than hard-coding interactions into the design of your app enables you to customize interactions and optimize them for individual users. These messages can make experiences like onboarding and purchasing dynamic, interactive, and far more engaging.

So in the spirit of celebrating the power of the in-app message, here are five examples of how in-app messages can move the needle in five different verticals: 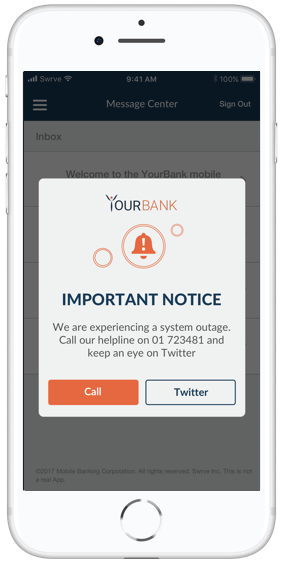 The challenge: For financial institutions, trust is important. That’s why if, for some reason, there’s an issue with the app that might prevent access, you’ll want to get in touch with users to let them know and reassure them it’s under control. Otherwise, you’ll be facing a flood of calls to your service team from customers who range from nervous, to slightly confused, to very annoyed. This is costly both in resources and reputation, so finding an efficient way of communicating with users is imperative.

The solution: That’s where the in-app message steps in. Automate a message explaining the situation to appear if a user goes into the app to access their account, and provide details of how to get in touch if they want further information.

Why in-app messages? As well as not causing unnecessary disruption by pushing onto the screens of users who weren’t going to be using the app anyway, the fact that the message appears in the app ensures that users know the notification is authentic, particularly when texts and emails can be subject to suspicion due to phishing. It’s also easy and quick to implement with an interaction platform like Swrve, so you can let people know what’s happening before they even have time to say ‘the app’s broken!’ 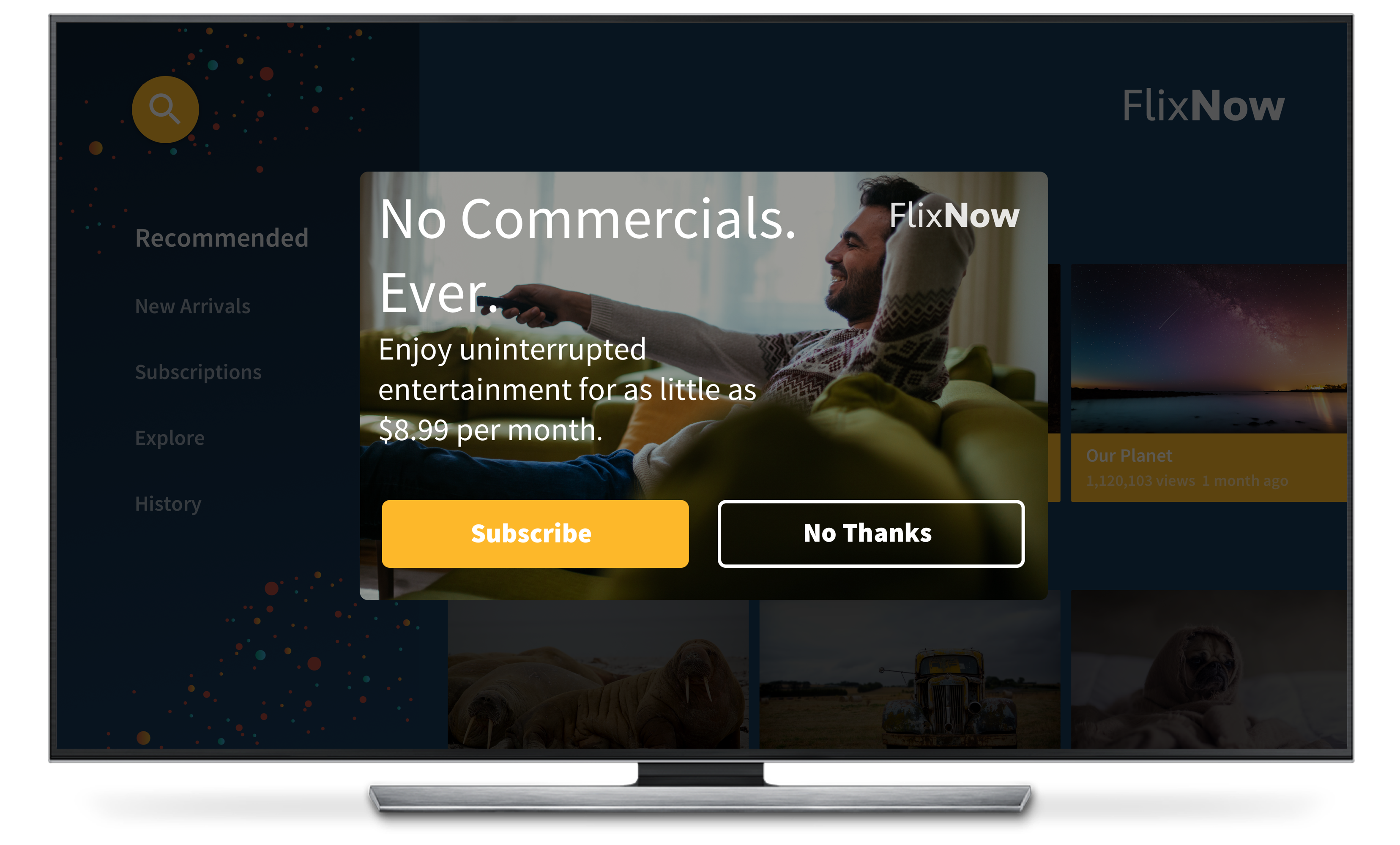 The challenge: One of the most common methods of monetizing media apps is by upselling to a premium version, and that point of conversion can be a delicate matter. Around 32% of free trials for OTT media streaming services result in a paid subscription, which still leaves plenty of room for improvement. Sending upsell suggestions to users too often, or before they’ve had time to use the app, is unlikely to get many sign-ups, but is likely to encourage churn.

The solution: Create and deliver unique campaigns that target specific audiences, rather than sending out generic promotions to all. Sending an in-app message to users during a session when they’ve been active for some time allows them to see what the app can offer that they might specifically be interested in. Use offers that are targeted to match users’ preferences to demonstrate the sort of personalized experience that they’d be willing to pay for.

Why in-app messages? In-app messages give you space to explain the benefits of upgrading from a free trial in more detail than the limited characters of a push notification, and they’re customizable to make the most of individual behaviour. Take a look at Swrve’s intent engine to see how you can put user data into action and optimize your messages. 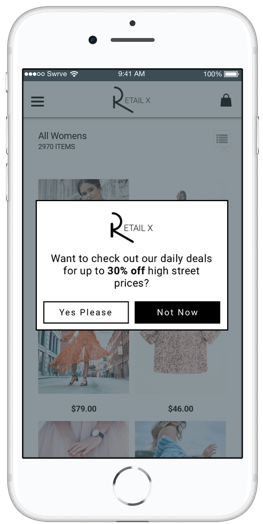 The challenge: There are thousands of retail apps all clamouring for users’ money, so why should they choose yours? The first answer is the quality of the goods - but the fact is that we all love a good deal. That’s why so many retailers use discounts and sales to encourage us to spend more. But those incentives are wasted money if they are targeted to and picked up by users who were about to shop anyway - so how do you ensure you only reach the right customers?

The solution: In-app messages are the smart way to target your campaign only to the most effective audiences, and to interact at the optimum moment. If a user has been looking at an item for a while but hasn’t gone to checkout yet, or is a regular user but hasn’t made a purchase in a while, it might be time to send an in-app message offering them a deal. Use customer behaviour data to target your messages, and consider adjusting the discount depending on how much they usually spend.

Why in-app messages? Rather than trying to draw users into a new session with push, make the most of the fact that users are more likely to take up an offer when they’re already in the app. Because in-app messages by definition only notify users who are already engaging, they’re likely to have the spare time to make a purchase, and if they’re browsing, you know they’re in the mindset to buy. Most importantly, rather than hard-coding a generic offer in the app (and wasting money as a result), in-app messages can be easily targeted only at a specific audience. Making the messages interactive by including links to the items or the discount code also makes these messages far more effective than static adverts. 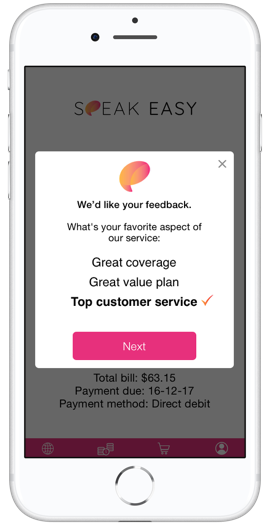 The challenge: For most Telco apps, the main purchase of a contract or device has already been made before the app is downloaded, so the goal of many apps is to deliver impeccable customer support. Research has suggested that 67% of customer churn is preventable through efficient customer service, so responding to users’ observations or requests is vital.

The solution: Creating great customer experiences relies on two-way conversations and listening to feedback - and messaging is a great way of creating a dialogue with users. Not only does it provide a decent indication of how you are doing in general, but if you receive negative feedback you can launch a deeper survey process through which users can provide more details on how you can improve. Meanwhile popping up a quick, one-click satisfaction survey is a lot more likely to get responses than an email or banner asking them to follow a link.

Why in-app messages? Engaging with a user in the app means you can trigger your survey to appear when users have just completed an action or have been spending a lot of time in the app, and therefore when they’re more likely to respond. In other words, you’re not getting in the way.. Making the request part of an app session, and in a way that supports ‘native mobile’ interaction, will mean significantly increased response rates compared to email for example - and that in turn means more accurate results.

The challenge: Since most of us only book travel a few times each year, it’s important to make sure as many browsing sessions as possible make it to completion! Estimates suggest that the cart abandonment rate for online travel booking is around 81.6%, and considerably higher than for digital retail as a whole. The slower purchase cycle is unavoidable: customers pause in their booking to compare prices or coordinate with fellow travellers, but we should still attempt to reduce that number. That involves reminding people about what they started, and encouraging users to go ahead and book without annoying those who were in the process of finalizing their purchase anyway.

The solution: When the user reopens the app, use an in-app message to remind them what they were looking at previously, and to link them back to complete the booking, making the process as easy as possible. Perhaps even add an image of that luxury hotel or picturesque city they were browsing, to jog their memory.

Why in-app messages? Since they’ve already opened the app, it’s strongly implied that the user is interested in booking again, and a safer bet than sending a push notification and just hoping they’re still planning the trip. Using an in-app message, you can deep link directly to where they can complete the purchase, and use text and visuals to remind them just how appealing that holiday is.