Jeremy Stoppelman, CEO of Yelp, always has a bunch of interesting things to say on their earnings calls. One thing in Jeremy’s opening few thoughts on the most recent call really jumped out for me. Jeremy said - “…we have evolved to a mobile-centric company. We will continue our focus in the mobile app since app users are more than 10x as engaged as web users based on the number of pages viewed, and our shift towards the app will enable us to establish a direct relationship with consumers.”

10x – that’s huge, and especially for Yelp. Yelp you’d imagine is all about transactions – I want to find somewhere nearby to eat, that sort of thing. So what’s going on?

Jeremy is not alone in this, Pinterest’s product lead for growth, Casey Winters, recently recounted how they were seeing 3x times higher activation on their mobile app than on their mobile web experience.  Casey was very pragmatic about it – they’d done the math and at the expense of annoying (and losing) a percentage of their more casual users it was still overall more valuable to get everyone from the mobile web over to the mobile app experience with campaigns like those shown below. 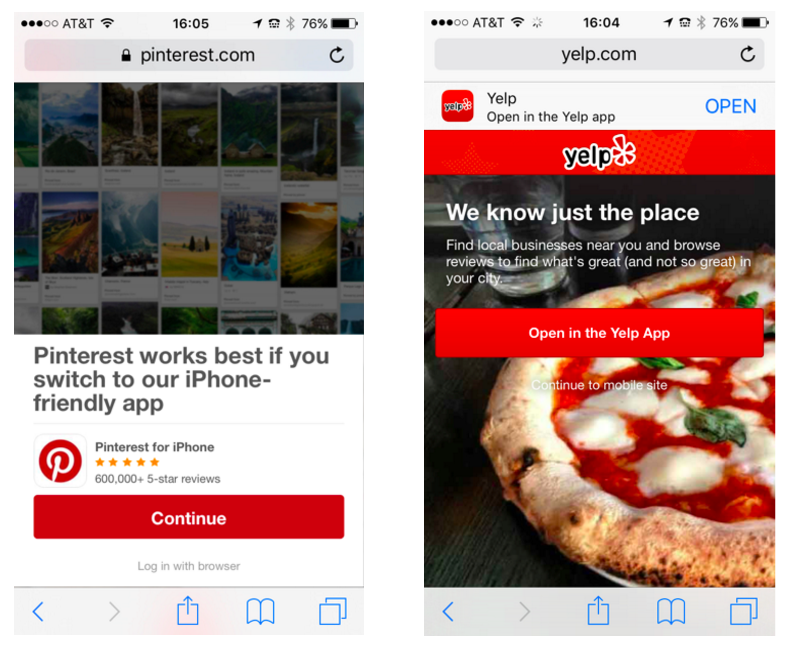 And it’s not just about the loyalty and engagement benefits of getting the app onto the homescreen. A sometimes overlooked side effect of this doubling down on mobile app versus mobile web is the fact that Yelp and Pinterest now own their own piece of user mindshare and are not as beholding to Google search to deliver them new users.

Here at Swrve we are seeing this again and again… As I’ve worked with our customers across multiple verticals it seems to be universally true - you will get better economics from your mobile app users. That said, if your mobile app adds no extra value, no extra functionality, no uniquely mobile pizzazz, then it may be that pushing your mobile web users to mobile app will see you lose too many users - to the extent that the overall equation doesn’t add up.

There’s an urban legend that in the early days of CD players, back when music systems still had both a CD player and a record player, a top exec asked to listen to the CD audio and the LP audio side-by-side. When the exec couldn’t tell the difference between the two - their instructions to the engineering team were simple: reduce the quality on the record player.

I’m not suggesting anyone reduce the quality of their existing mobile web offering but as additional investments are weighed up, the case for going all in on Mobile App seems ever stronger.

The numbers from Yelp and Pinterest (and Eat24 and Pepboys and RueLaLa and a host of others) all indicate that we are seeing a broad base consumer change. Next time you’ve got a few minutes to spare you should lean back and consider what a 10x more engaged user would do for you and your business.